The High-end Transport Ventilator for every Application

A working day for the emergency services is never the same as any other. MEDUMAT Transport is the perfect solution when you are facing challenges that change every day. This is because technology needs to adapt to the situation, not the other way around. MEDUMAT Transport is a reliable device at all times and in any environment – whether you are at the scene of an emergency, in an ambulance, in a helicopter, or at a hospital. MEDUMAT Transport is flexible and offers optimum support as you carry out your work.

Are you interested in our devices and would you like some advice about MEDUMAT Transport? Please get in touch with our Customer Service team.

MEDUMAT Transport being operated by user

MEDUMAT Transport in an emergency vehicle

We offer a comprehensive product portfolio and accessories that cover every eventuality.

A key feature of WEINMANN accessories and consumables is their intuitive and simple handling.

We also offer various accessories and consumables for MEDUMAT Transport. Find out more in our:

Are you looking for more information?

After your purchase we take care of your devices.

With repairs, maintenance, safety checks (STK) and electrical safety checks, we offer you a complete service for your device:

Always Stay on the Right Track

MEDUMAT Transport securely and quickly transfers session data wirelessly via Bluetooth® data transmission. This is because documentation after responding to an emergency is extremely important. MEDUMAT Transport can transfer ventilation parameters, changes to settings, and ventilation trend data to documentation systems wirelessly and quickly. This takes place securely through selected documentation systems and requires an active request to prevent misuse by unauthorized parties.

MEDUMAT Transport is already connected to the documentation systems from MedDV, Tech2Go, ZOLL, CKS Systeme, and to the Corpuls³ defibrillator.

Do you want your MEDUMAT Transport to communicate with your documentation system? Please get in touch for more information.

Safe for Children and Adults

MEDUMAT Transport is Suitable for all Patient Groups

You can use MEDUMAT Transport to ventilate infants, children, and adults. In pressure control ventilation modes, tidal volumes below 50 ml are also possible without any issues.

It isn’t just the ventilator that is geared toward different patient groups, the consumables are too. In addition to the standard disposable and reusable breathing circuits in 2 m and 3 m lengths, there is also a variant with reduced dead space for children and adults. This means MEDUMAT Transport offers you the flexibility you need as a user.

MEDUMAT Transport is Ready for Take-Off

The emergency ventilator is fully equipped for the air rescue service. It is the small details that make all the difference: MEDUMAT Transport has a night mode with a dimmable display so that the user can easily read the parameters at any time. The bright alarm light can also be deactivated if needed to prevent a glare effect. The NVG mode is also designed for use with night vision devices.

But it's not just at night that the MEDUMAT Transport provides the required visual support.

Despite the high levels of surrounding noise during an air rescue, the MEDUMAT Transport draws attention in an emergency thanks to its alarm light. An extreme lack of space was also taken into account during development. Even though the MEDUMAT Transport is our largest ventilator, flexible device operation is made easy by the ability to access connections and controls from the front. You can safely install the MEDUMAT Transport in your helicopter using WEINMANN Emergency’s flexible and individual brackets, as well as those from several helicopter outfitters.

The airworthiness of the emergency equipment in terms of shock and vibration resistance, as well as electromagnetic compatibility, has been proven in a wide variety of tests. MEDUMAT Transport thus complies with all the necessary standards for use in air rescue services: MIL-STD 810G (Method 514.6), RTCA/DO 160E, EN 60601-1-2, EN 794-3, and EN 13718-1.

With the Simulation Software

Would you like to find out more about the functions of MEDUMAT Transport or get to know how the device works?

Use our interactive simulation software 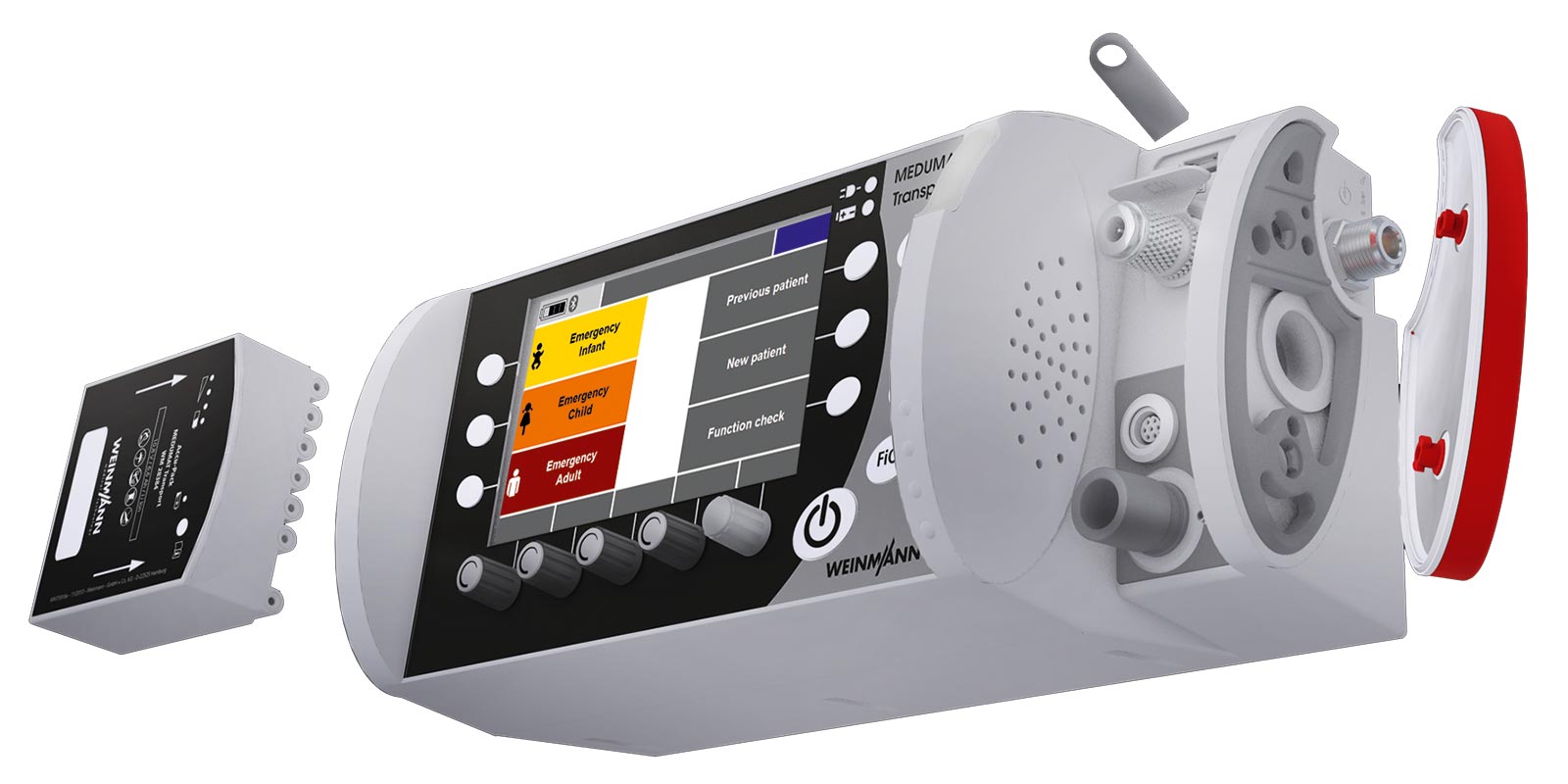 To transmit settings, for example, or to make a software update on your own

Operating time of up to 7.5 hours in normal operations

Simplify and speed up device operation

Protects the interior of the the device from contamination